Recover the heat in the Data Center? 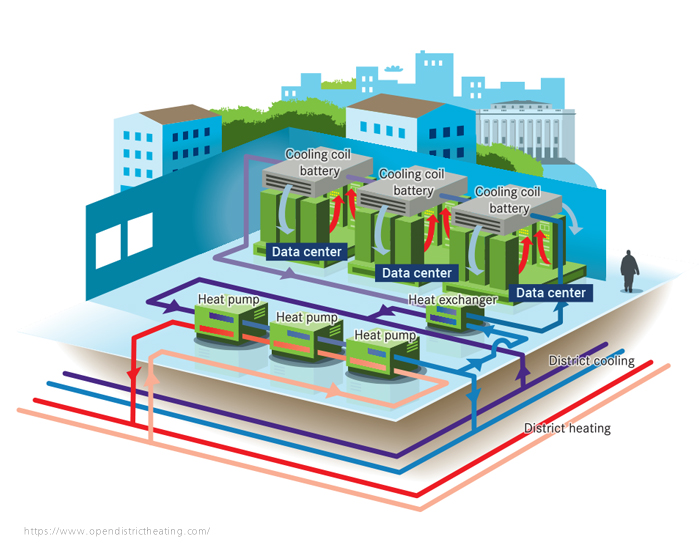 Energy efficiency is a goal and a desire within the society. Production processes involve a series of waste, pollution and energy expenditure that attempt to be palliated by using new techniques and technologies. A good way to meet the energy efficiency objectives is through the reuse of the generated waste.

If the data center produces hot air that must be eliminated or reabsorbed since it is a problem for the equipment, can we see it as a logical residue of its activity? And why not take advantage of this generated thermal energy? The reuse of that hot air would help to warm other spaces or even water to serve the daily activity of offices, apartments, hospitals, etc.

Has anyone imagined heating the office with the recycled air from a data center? The clear advantages would be the reduction of carbon emissions and, the consequent saving in costs. We think that the hot air average temperature inside a CPD is around 35 – 40 degrees Celsius, while temperatures up to 90 degrees are found in microprocessors. All this waste heat can be used, in fact, some Nordic countries such as Finland are beginning to apply this concept of “hot air recycling plant”.

There are real examples implemented, like the pool of the Swiss town of Uitikon that, since 2008, is heated by waste heat from IBM and GIB Services AG CPD. Under the Finnish Uspenski Cathedral lie several data centers heating 500 homes.

But this alternative poses a number of problems; the first of them is the difficulty of transporting the heat so the CPD we want to use for this purpose should be close to the amenities to be heated. This obviously raises the problem of space and location.

It is also difficult to adjust the heat that the data center releases to the desired space since the density within the CPD tends to be very high. In addition, data centers’ owners do not want to make an installation attached to it for reusing that air, since it implies increasing the costs and extend the use of the space.

And if we talk of recovering the heat released by the data center we cannot forget the cogeneration and the trigeneration; it’s about producing simultaneously thermal and electrical energy from waste heat by absorption systems. A few examples? The Alestra data center in Mexico that thanks to its gas cogeneration plant produces enough energy to feed its CPD and cool it.

Although there is still a long way to go, “data ovens” are being established as a real alternative to take advantage of that residual thermal energy, reduce spending and also improve the energy efficiency both of the data center as of the facilities that benefit from the same.