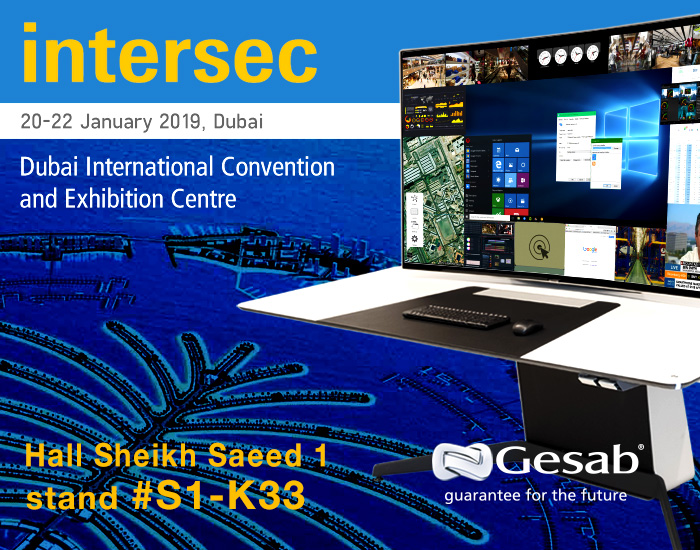 GESAB will participate at a new edition of Intersec Dubai, the reference event in security throughout the Middle East. A unique opportunity to learn about the new concept proposed by GESAB for critical work environments and 24/7 where smart systems and consoles are included and integration becomes the key to success.

More than 27 years of experience in the development of rooms and work spaces in different sectors have led GESAB to lead the change with a view to the future; Differential proposals to define the definitive transformation of the control centres.

GESAB takes the concept of Smart Consoles one step further, betting on the development of control consoles with the latest in design and integrated technology. The ACTEA Series grows with the introduction of the new ACETA Max with a breakthrough design and a more robust structure thanks to its double lifting motor in its central column.

GESAB is defining the future of control centres thanks to a new ecosystem where design, ergonomics and technology come together to transform it. An integrated environment with intelligent consoles from which operators can control a large number of information sources and visualize it in state-of-the-art audio-visual systems.

2019 Intersec will be the official presentation event of the new DeskWall 2.0, more versatile, smarter and more powerful. The dynamic KVM system developed by GESAB comes with important innovations; a new era in the management of critical environments that, in addition, will continue to evolve to offer the user the highest standards of ergonomics and health.

In addition, GESAB completes its proposal for this new edition with the DataWall universe, a firm commitment to offer the most cutting-edge audio-visual systems, tailored solutions to achieve the greatest efficiency in visualization. And as a protagonist in the stand, there will be a Micro Led videowall, the technology of the future made a reality today.

The experience of GESAB in the Middle East during the last years has focused on the development of integral and customized solutions, seal of the house, which have allowed to complete such emblematic projects as the Dubai Transport Strategic Project, the Command and Control Centre from Mecca and collaborating with entities such as Kuwait Oil Company, Oman Muskat Airport or Iman University. Projects that place GESAB as a reference in the development of critical environments throughout the area.