The latest solutions for control centres at Intersec 2018 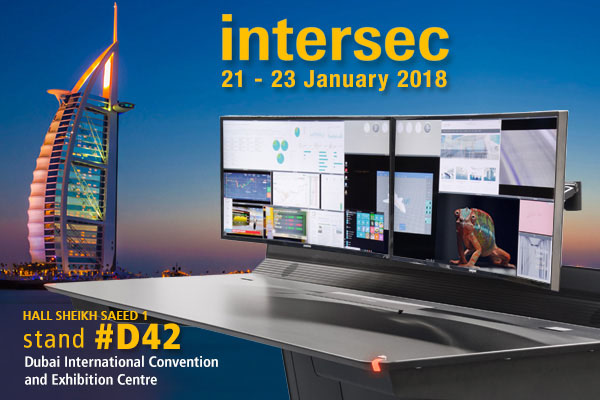 GESAB will attend a new edition of Intersec. The most important safety event held in the Middle East that will take place between January 21 and 23 in Dubai. During the 2018 edition, GESAB will present the new generation of ACTEA Series consoles, closed type design with cutting-edge materials. New consoles that incorporate the size concept and go a step beyond ergonomics through the Sit & Stand system.

Thanks to GESAB’s philosophy, which places users at the centre of the action, the new consoles help shape a healthy working environment for 24/7 critical environments. A new way of understanding control centres applying the maximum technology and innovation.

Attendees will also have the opportunity to know the latest dynamic KVM system. DeskWall, developed by GESAB, proposes a new work philosophy that gives the operator the ability to generate, with absolute flexibility, a viewing space of up to 12Kh where to organise all its applications, programs, displays, app, smart apps, web services, IP video, streaming, social networks or widgets.
A revolutionary concept where the KVM is reinvented to offer the control of equipment and sources of information to the user through a single keyboard and mouse in a revolutionary concept: the multi-canvas.

GESAB continues to lead large projects in the area, the most recent are the Control Room of the Louvre Museum in Abu Dhabi or the Dubai Transport Strategic Project Command and Control Centre of RTA in Dubai, inaugurated by the Prime Minister and Vice President of the Arab Emirates, his highness, the Sheikh Mohamed bin Rashid Al Maktum.

Some other projects developed in the Middle East are the Jeddah Control Centre, or the Mecca Command and Control Centre, which controls the safety of the second largest city in Saudi Arabia. Customers like Kuwait Petroleum, Oman Muskat Airport or Iman University have also relied on GESAB.

Its international expansion continues to grow and the development of this type of projects has allowed GESAB to consolidate as a benchmark in the entire Middle East area.