GESAB has something that will surprise you (chapter 3) 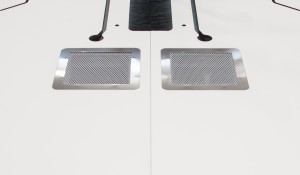 Let the air flow. Let the equipments to have the flow they need to deliver maximum performance. We seek to achieve efficiency and effectiveness. They are not the same and must be supplemented:

Efficiency in general describes the extent to which time or effort is well used for the intended task or purpose. It is often used with the specific purpose of relaying the capability of a specific application of effort to produce a specific outcome effectively with a minimum amount or quantity of waste, expense, or unnecessary effort. Efficiency has widely varying meanings in different disciplines.

The term efficient is very much confused and misused with the term effective. In general, efficiency is a measurable concept, quantitatively determined by the ratio of output to input. Effectiveness, is a relatively vague, non-quantitative concept, mainly concerned with achieving objectives. In several of these cases, efficiency can be expressed as a result as percentage of what ideally could be expected, hence with 100% as ideal case. This does not always apply, not even in all cases where efficiency can be assigned a numerical value, e.g. not for specific impulse.

A slightly broader model of efficiency that nevertheless remains consistent with the percentage definition in many cases is to say that efficiency corresponds to the ratio r=P/C of the amount P of some valuable resource produced, per amount C of valuable resources consumed. This may correspond to a percentage if products and consumables are quantified in compatible units, and if consumables are transformed into products via a conservative process. For example, in the analysis of the energy conversion efficiency of heat engines in thermodynamics, the product P may be the amount of useful work output, while the consumable C is the amount of high-temperature heat input. Due to the conservation of energy, P can never be greater than C, and so the efficiency r is never greater than 100% (and in fact must be even less at finite temperatures).

In mathematics, effective is sometimes used as a synonym of algorithmically computable.

In physics, an effective theory is, similar to a phenomenological theory, a framework intended to explain certain (observed) effects without the claim that the theory correctly models the underlying (unobserved) processes.

In heat transfer, effectiveness is a measure of the performance of a heat exchanger when using the NTU method.

In medicine, effectiveness relates to how well a treatment works in practice, as opposed to efficacy, which measures how well it works in clinical trials or laboratory studies.

In management, effectiveness relates to getting the right things done. Peter Drucker reminds us that effectiveness can and must be learned.

In humancomputer interaction, effectiveness is defined as the accuracy and completeness of users tasks while using a system.