GESAB has something that will surprise you (chapter 5) 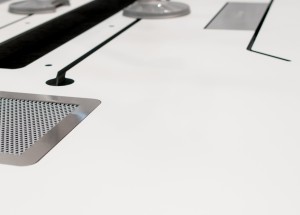 Fusion, bonding, amalgam, synergy. Every synonym is good, if we can get different materials and technologies work together to deliver optimal performance. GESAB  Group has over 20 years building materials studies, ergonomic designs and configurations to reach the highest levels in their products and solutions. Ergonomics is a key to the team’s work GESAB design. Recall some important concepts:

The term ergonomics, from Greek, meaning “work”, “natural laws”. First entered the modern lexicon when Wojciech Jastrzębowski used the word in his 1857 article Rys ergonomii czyli nauki o pracy, opartej na prawdach zaczerpniętych z nauki przyrody (The Outline of Ergonomics, i.e. Science of Work, Based on the Truths Taken from the Natural Science). The introduction of the term to the English lexicon is widely attributed to British psychologist Hywel Murrell, at the 1949 meeting at the UK’s Admiralty, which led to the foundation of The Ergonomics Society. He used it to encompass the studies in which he had been engaged during and after the World War II.

The expression “human factor” is a North American term which has been adopted to emphasise the application of the same methods to non work-related situations. A “human factor” is a physical or cognitive property of an individual or social behavior specific to humans that may influence the functioning of technological systems. The terms “human factors” and “ergonomics” are essentially synonymous.

History of the field

The foundations of the science of ergonomics appear to have been laid within the context of the culture of Ancient Greece. A good deal of evidence indicates that Greek civilization in the 5th century BC used ergonomic principles in the design of their tools, jobs, and workplaces. One outstanding example of this can be found in the description Hippocrates gave of how a surgeon’s workplace should be designed and how the tools he uses should be arranged. The archaeological record also shows that the early Egyptian dynasties made tools and household equipment that illustrated ergonomic principles. It is therefore questionable whether the claim by Marmaras, et al., regarding the origin of ergonomics, can be justified.

In the 19th century, Frederick Winslow Taylor pioneered the “scientific management” method, which proposed a way to find the optimum method of carrying out a given task. Taylor found that he could, for example, triple the amount of coal that workers were shoveling by incrementally reducing the size and weight of coal shovels until the fastest shoveling rate was reached. Frank and Lillian Gilbreth expanded Taylor’s methods in the early 1900s to develop the “time and motion study”. They aimed to improve efficiency by eliminating unnecessary steps and actions. By applying this approach, the Gilbreths reduced the number of motions in bricklaying from 18 to 4.5, allowing bricklayers to increase their productivity from 120 to 350 bricks per hour.

Previous to World War I the focus of aviation psychology was on the aviator himself, but the war shifted the focus onto the aircraft, in particular, the design of controls and displays, the effects of altitude and environmental factors on the pilot. The war saw the emergence of aeromedical research and the need for testing and measurement methods. Studies on driver behaviour started gaining momentum during this period, as Henry Ford started providing millions of Americans with automobiles. Another major development during this period was the performance of aeromedical research. By the end of WWI, two aeronautical labs were established, one at Brooks Airforce Base, Texas and the other at Wright field outside of Dayton, Ohio. Many tests were conducted to determine which characteristic differentiated the successful pilots from the unsuccessful ones. During the early 1930s, Edwin Link developed the first flight simulator. The trend continued and more sophisticated simulators and test equipment were developed. Another significant development was in the civilian sector, where the effects of illumination on worker productivity were examined. This led to the identification of the Hawthorne Effect, which suggested that motivational factors could significantly influence human performance.