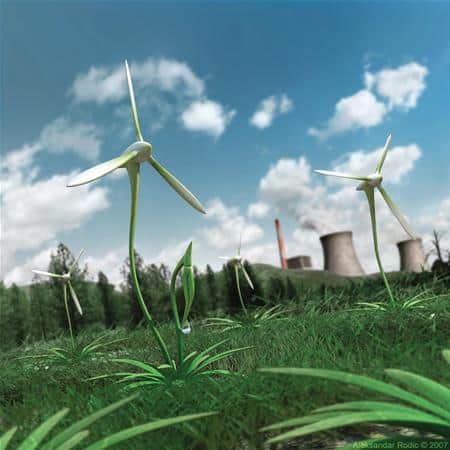 Green energies are not only suposed to be cleaner but they also should be cheaper. A team from Harvard School of Engineering and Applied Sciences is developing flow cells, a type of rechargable battery. This is the full article, taken from The Engineer:

Cheaper and more environmentally friendly methods for storing renewable energy could result from a US project to develop flow cells, a type of rechargable battery.

Particularly suited to storing large amounts of energy, flow cells can be linked into electrical distribution grids and can be sized to meet a wide range of power requirements. The project, led by Michael Aziz of the Harvard School of Engineering and Applied Sciences, aims to reduce the cost of this technology so that it can compete with current solid battery systems, which are cheap but limited.

Flow cells work by pumping liquid electrode materials, which carry positive and negative charges, through an electrochemical conversion cell  similar to a fuel cell  which generates electrical current. Pumping the liquids in the opposite direction while supplying current to the cell recharges the battery. The amount of power the cell can produce is dictated by the size of the electrochemical cell, while the amount of energy it can store depends on the volume of the electrode materials in the system, which are held separately from the cell in external tanks.

This makes flow cells the only type of battery where power and energy capacity are decoupled from each other and can both be sized according to the needs of the current source  the renewable generator, whether a wind turbine, solar array, or marine energy converter  and the building or buildings the storage system serves. Flow cells can also maintain power supply for longer than a solid battery, where the current decreases as the cells lose their charge.

However, current flow cells often use expensive metals, such as vanadium, in their electrochemical conversion cells, and also use liquid electrolytes, which are expensive, potentially hazardous or difficult to handle, for example, needing to be held at high temperatures. Aziz, who is working with commercial electrochemical systems developer Sustainable Innovations, aims to solve this problem by using small organic molecules, which are non-toxic, liquid at room temperature and cycle efficiently between charged and uncharged states. These molecules are found in plants, he claims, and can also be synthesised artificially. A fellow Harvard scientist, Alán Aspuru-Guzik, who has been researching organic molecules that have potential in solar cells, is working to identify candidate molecules for the flow cells.

We think our particular approach could have advantages over other flow batteries, such as higher power density, high efficiency, inexpensive chemicals, and a safer type of energy storage, Aziz said in a statement. This, he said, could make it practical to install flow cells into buildings equipped with solar panels, or allow them to be integrated directly into wind or solar farms, possibly being even cheaper than the lead-acid batteries currently used as back-up for non-grid connected solar installations.

Currently no cost-effective solution exists to this large-scale storage problem, Aziz said. Flow batteries may make stationary storage viable in the marketplace, and that will enable wind and solar to displace a lot more fossil fuels.

The Harvard research is supported by a $600,000, one-year grant from the US Department of Energy, which could be extended beyond a year depending on the projects results.