How to design a control room on approval of future changes in display technologies? 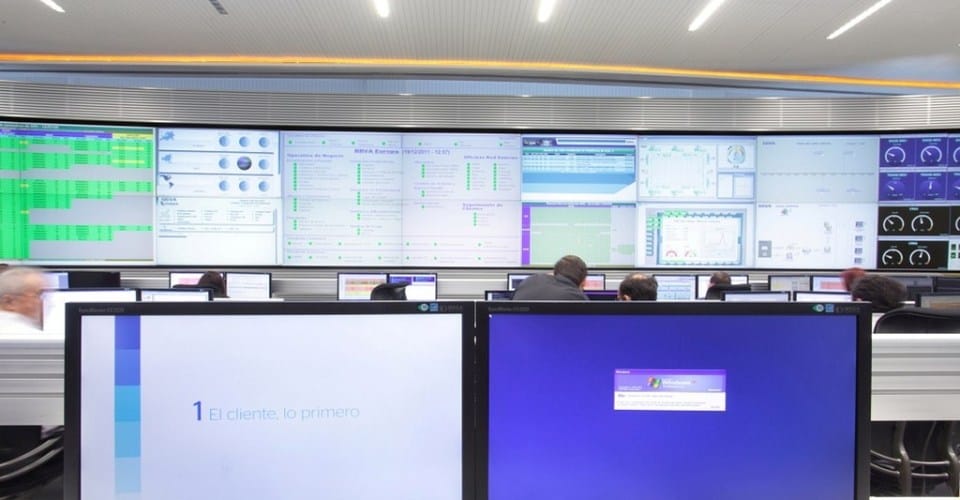 A control center, from its begging, has as main objective to centralize as much as information as possible in a process in order to be able to make correct decisions.

The first examples of these kind of spaces can be observed in automated production lines from the middle of last century (20th century), as well as in power generation plants where all the monitoring variables of the process and mechanisms of control began to be centralized.

At the same time that all industrial technology has evolved in different sectors such as oil or energy, security, telecommunications, aerospace, transport, etc., more and more information is generated from all processes and the operators of the control centers have to be able to visualize in an adequate way to be able to analyze the results of the process they are monitoring and avoid a prossible crisis (that in some critical situation could even result in a catastrophe).

For more than three decades all this information that is collected in the control centers has been interpreted in a more friendly way in graphical control interfaces, which require an adequate means of deployment so that the operators could work.

A necessary tool to be able to visualize and interpret all this information common for all the people who work in a control center are videowalls, which have also evolved in the last three decades of technological development.

At the present, there are several options that can be used to install these videowalls in a control center and, at the same time, the means that allow capturing (or even generating) the content displayed on these canvases have evolved.

Therefore, in order to design a control room on approval of future changes in display technologies two fundamental points must be take into account:

This section of the display system is the most attractive, since it is the hardware that allows to generate the pixels on the wall where the information is going to be viewed. In addition, with the technology available on the market, there are no size and resolution restrictions to meet the needs of the control center.

The world of available manufacturers can be segmented into three main technologies, each one having virtues when talking about future-proof design:

This technology has exist on the market for several decades. As its name indicates, it is a projection-based system, which over the years has had three generation changes in the component that generates the light to be able to proyect:

With this lastest generation of rear projection cubes, it can be thought of an excellet long-term investment (10 to 12 years) by having the most reliable technology available and also proven for many years in the industry.

At the same time that the heyday of rear projection videowall with LED lighting was being lived, an alternative technology was born on the market to be able to create a canvas of pixels on the wall: LCD technology.

This technology revolutionized most image display markets, from commercial use at home to professional use, both in small and large-scale formats, since an organic material was incorporated that could be manipulated with electrical impulses to be able to generate the color of a pixel to a chassis much thinner than a rear projection cube. Inside this compact chassis are also integrated all the electronic video circuits and, of course, the illumination source of the screen, which is currently LED lighting.

This invention began to be used in videowalls for Control Center and the main advantage that gives the reduction in installation spaces, since these videowalls can even be hung on a wall with enough force. At the same time, the investment volume of this technology compared to rear projection cubes is also considerably lower.

But a major disadvantage of LCD technology is image retention, which can be more drastically viewable on videowalls where the content being displayed tends to be very static (non-moving images). This image retention effect is inherent in the very functioning of the organic material on the screen and is irreversible.

The latest generations of LCD screens available on the market allow a bezel (edge ​​between each of the modules) almost less than 1mm, so continuity on the wall has improved over time.

Also some manufacturers have launched products to the market with up to 100,000 hours of life, which is one of the factors to be able to consider a future-proof installation.

This technology, as its name implies, uses the direct emission of light from Diodes (LED) to create an image, so each pixel would have a suitable combination of red, green and blue light to create the correct colour gamut.

The Direct LED technology has existed in the market for more than a decade, having an exponential apogee in applications of Digital Advertising in Spectacular, where the size of each of these LED diodes was invaluable, since the distance at which a viewer See this light as spectators is quite wide, so the effect of being able to interpret an image with our sense of sight is achieved.

With the passage of time, LED technology matured and the diodes used to form these canvases are getting smaller and smaller, so its application for professional use systems, such as Meeting Rooms or Control Centers, is already viable. , with the disadvantage of still having a high price offer (considering an adequate quality level for a control center).

The main advantage of integrating this technology in a control center is that it can be seen as a single screen of the size chosen by the client, since the installation of these LED strips is almost perfect and continuity and excellent image quality is achieved. . While a main disadvantage (or competitive equality when compared to commercially available LCDs), is that the nominal lifetime specified in this technology is around 60,000 and 80,000 hours – the same lifetime as some of the ultra-slim bezel LCD modules mentioned. previously.

An important drawback in the integration of this technology for control centers, particularly where you want to have a videowall of quite large proportions, is the cost of use, since a lot of electrical energy is required to power this equipment and a great heat dissipation to keep the equipment in operation.

As it is a new technology in constant development, it can be considered as an option for installation in the medium term, since it is very likely that in the short term there will be a new generation of this equipment available on the market. But at the same time, it is ideal for users who prefer to stay at the forefront of technological innovation within their control centers.

GESAB is committed to implementing the most appropriate technology in the client’s project, which is why it offers personalized advice for each case, always seeking the best possible result.

Regardless of the type of technology that is selected to create a videowall, the video processor is the most important point of these display systems, since it is the component that provides the information that is going to be displayed on it and, in some cases, also in the monitors of the operators.

In practical terms, this component is depended on to provide a functional tool to control center operators , and not just a mega-screen that shows static content.

In recent years, it has been observed that the information received by the control centers is in constant development and expansion, therefore this video processor must have a wide capacity for growth and flexibility to be able to receive content from different systems.

These video processors today are capable of opening any number and type of video source, from an h.264 video stream from a field signal, a large-scale monitoring application, to a session remote virtual machines.

It must also be considered that many control and monitoring applications are now developed in more open environments, such as HTML5, instead of complex dedicated programming as has been done in recent decades. This migration to more flexible environments also allows for much easier short-term growth. Therefore, a suitable video processor is also the one that can manage this HTML content in a more friendly way and that can be molded to future developments.

There are some video processors that also allow content management at workstations. GESAB, for example, through DataWall provides these content management tools for operator positions at the same time that they can use the videowall as a means of projection of content.

Selecting a system that allows you to be flexible in being able to integrate various video sources in the medium term is the most important piece to design a control room that is proof of future changes in the display systems.