Visual ergonomics at the control room: the videowall

The resolution of the display surface, be it of a television, computer monitor or VideoWall, is one of the most important characteristics when establishing the technical solution to adopt.

Currently there is a trend, promoted by the Home TV market, which leads us to think that the higher resolution a screen has the better visual experience will be, as there are televisions on the market that even reach 8K resolutions.

If a screen is implemented with a below resolution than necessary according to the distance of the operators, it could affect a bad perception of the image, while an excess of resolution is no longer perceptible from a certain distance, so it would be wasting. Therefore, it is essential to carry out a study to avoid not reaching the recommended minimum or exceeding it.

It can be easily understood by doing a simile on the work of a painter.

In the first case, excess resolution, would be the equivalent of visualizing a painting of the Realism movement, where the painter tries to capture all the details to perfection. However, when observing it from a distance these details are imperceptible to the human eye being necessary to get closer to see them. 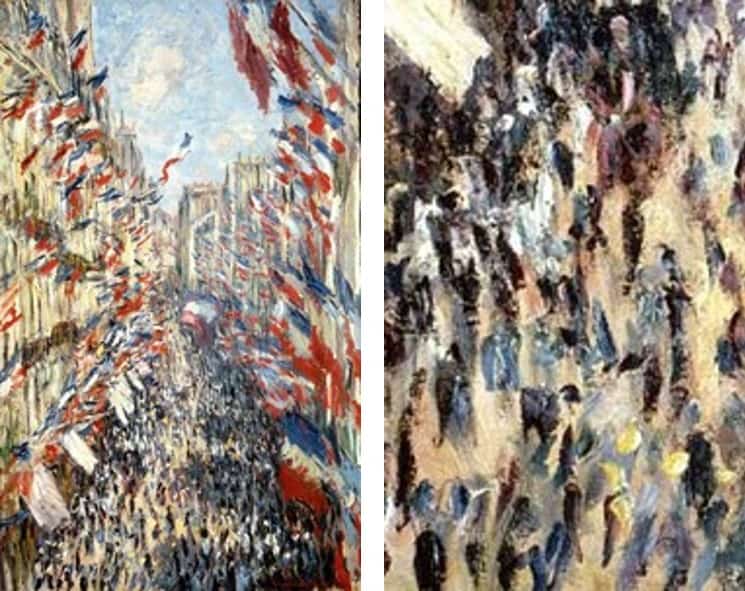 In the second case, insufficient resolution, it would be based on visualizing an Impressionist painting two feet away, from which only rough strokes of colors would be perceived. But when we move away, lights, shadows and figures appear and are perfectly perceived.

Consequently, it can be deduced taht the important thing is not the total resolution that viewing surface has, but the relationship among the resolution and the distance from wchich it is to be viewed. So that it is essential to study in detail the visual ergonomics of each proyect to provide the optimal solution.

It seems logical to think that the higher resolution there is, the greater degree of definition there will be on the image and its details, but this only occurs in the distance interval that the human eye is capable of perceiving.

The following graph shows the distance in which a person would be able to appreciate the benefits of the most common resolutions depending on the screen size. On the left side, there are two scales on the Y axis, one corresponding to peolple with perfect visual acuity and another to which a correction factor has been applied that allows to get a good,  but not perfect visual acuity to be covered, such as the case of people who use vision correctors as contact lenses or glasses. 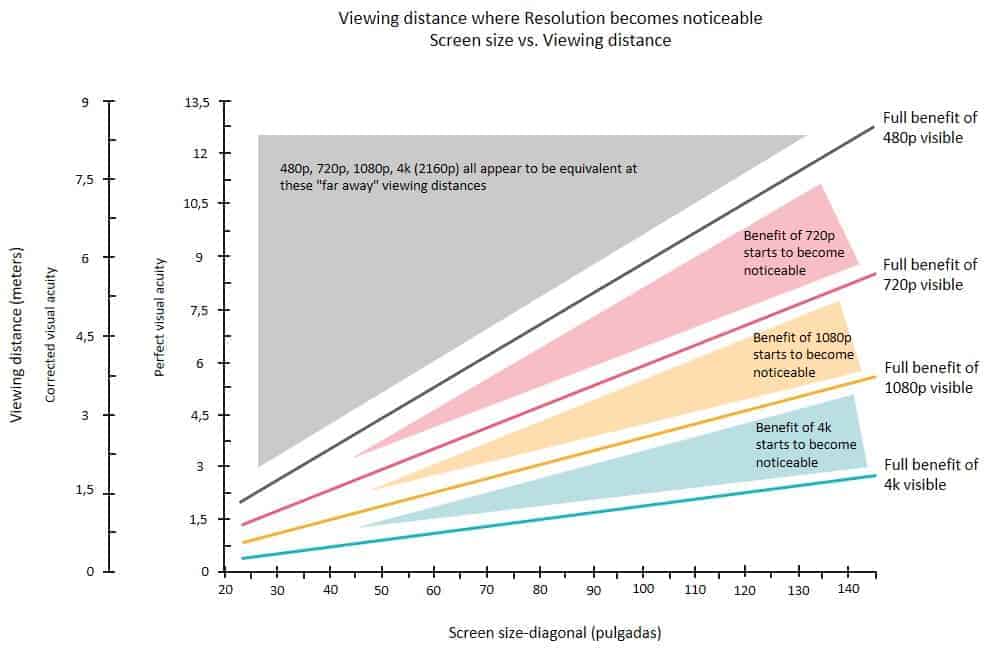 Considering this graph, a person situated 3 meters away from a 100 inches screen would be able to perveice the benefits of a FullHD resolution, so a higher resolution would be wasted.

In big spaces, such as presentation rooms or control centers, special attention should be paid to the most critical display, that is, to the users who are farthest from the screen.

Text is one of the contents whose display is more sensitive to the resolution and distance effects, while videos and graphics would be exceeded by its demans. Thus, texts are the basis of any study that seeks optimal visual ergonomics.

But, what is visual acuity? It is defined as the ability of the human vision system to perceive, detect or identify special objects with good lightning conditions. As an evaluation criteria it is commonly used the Snellen Test, by all known, that consists of correctly identifying the letters on a graph.

A person with perfect visual acuity is able to distinguish up to the row marked as 8 grade visual acuity that corresponds to a 8,8 mm letter display at a distance of 6 meters (20 feet). This size is directly related to the physiology of the human eye.

Thus, for example, the letter E of the following image would cease to be perceived correctly at the moment in which thedistance D made the α angle be less than 10′, since it would begin to be confused with other letters by don’t being able to detect the nuances of the letter.

In terms of visual ergonomics, it is common to establish three ranges that determine the quality of visual ergonomics: borderline, acceptable and good ergonomics. In this ranges the standard visual acuity is taken into considerantion instead of the perfect one, since it is the majority of the situations that users may meet.


The resolution of the display surface must be adecuate to be able to perceive the details that allow them to differentiate one letter from another. A person approximately situated 4,5 meters away with standard visual acuity would be able to read text that is at least 25mm high under good lighting conditions.

These same results have been contrasted with different sources, such as ISO standard of normalization and Technical Guides from several manufacturers of audio-visual electronic equipment with extensive experience. For example, the ISO-11064 Part 4 standard states that the minimum angle of view must be 15º, consistent with the angle marked as acceptable above.

The resolution necessary to define a capital letter must be at least 7 pixels in height and 5 pixels for a lowercase letter, as can be seen in the following image with the “A” letter.

With the new LED technology portfolio that exists on the market and is already being use for corporate applications and control centers, these considerrations can be put into practive more effectively, since there is a very wide range of pixel size ( the specification widely known as “pitch”).

As an example, in a Control Center composed of more than 45 operators distributed in 4 rows, the VideoWall has dimensions of 1.7 meters high by 22 meters long approximately, depending on the chosen technical solution. Three different alternatives are proposed: 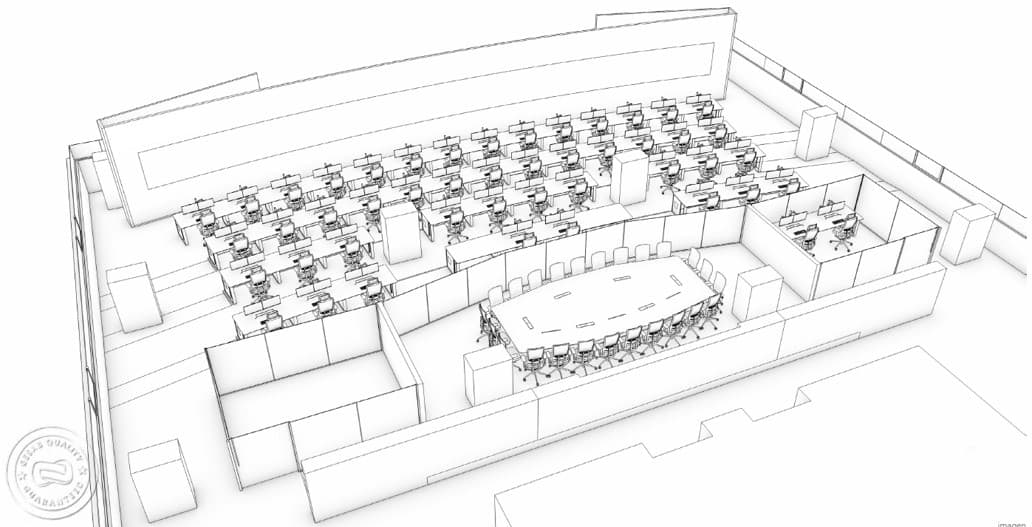 After considering a complete VideoWall in height, analyzing the location of each row of operators and applying the vision correction factor, it is appreciated that only the operators in the first row would be able to perceive the benefits of a esolution higher than Full HD technology, so an investment in such a high resolution would be wasted.

In the most unfavorable position, that is, the fourth row located almost 10 meters from the VideoWall, the visual ergonomics is located in the following font sizes:

With this font size, the text is perfectly defined in any of the technological solutions previously described for the VideoWall: 55 pixels for rear proyection, 42 pixels for 1.2 MicroLed and 32 pixels 1.5 MicroLed.

It is also important to note that the operators in the first row would not see an excessively large font size or a set of fuzzy pixels, but a correctly defined image, since at the distance they are located they are not able to detect a pixel from another but they will see everything as a homogeneous surface.

The resolution, distance, visual acuity and size of visualized objetcs, especially texts, have an important impact on the visual ergonomics of the operators and turn out to be the definitive factors to take into account in the design and implementation of a control center project.

When choosing the optimal resolution for the VideoWall of the room, the benefits of a higher resolution must be evaluated, as they may not be noticeable.

Finally, following the above described and the experience of GESAB, it has been verified that a MicroLED VideoWall with 1.2 or 1.5 pitch reaches an adequate degree of definition of the sources for the Control Center.